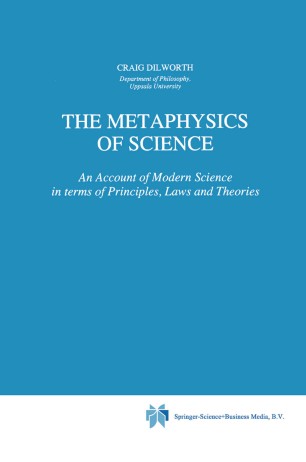 The Metaphysics of Science

Part of the Boston Studies in the Philosophy of Science book series (BSPS, volume 173)

The roots of this work lie in my earlier book, Scientific Progress, which first appeared in 1981. One of its topics, the distinction between scientific laws and theories, is there treated with reference to the same distinction as drawn by N. R. Campbell in his Physics: The Elements. Shortly after completing Scientific Progress, I read Rom Harre's The Principles of Scientific Thinking, in which the concept of theory is even more clearly delineated than in Campbell, being directly con­ nected to the notion of a model - as it was in my book. In subsequent considerations regarding science, Harre's work thus became my main source of inspiration with regard to theories, while Campbell's re­ mained my main source with respect to empiricallaws. Around the same time I also read William Whewell's Philosophy of the Inductive Sciences. In this work, Whewell depicts principles as playing a central role in the formation of science, and conceives of them in much the same way as Kant conceives of fundamental syn­ thetic a priori judgements. The idea that science should have principles as a basic element immediately made sense to me, and from that time I have thought of science in terms of laws, theories and principles.