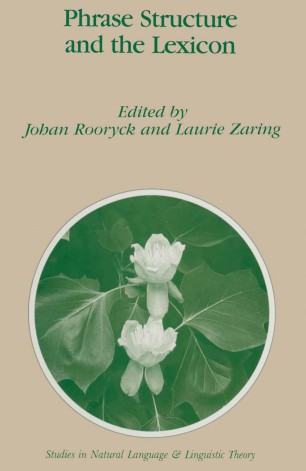 Phrase Structure and the Lexicon

V, ThemelPatients to the lowest specifier of V', and Agents to a position outside the minimal VP. Again, thematic information is encoded in terms of configurational properties. Addressing the issue of phrase structure in another domain, Margaret Speas investigates the status of null pronominal objects in Navajo. Following Rizzi (1986), she assumes that null pronouns must meet both a licensing and an identification condition. More specifically, she demonstrates that distributional restrictions on null pronominal objects in Navajo can be explained if it is assumed that null objects obey the identification condition expressed by the Generalized Control Rule of Huang (1984). Distinguishing three types of null objects, she argues that relevant licensing condition on two subtypes of null objects involves rich agreement. However, it appears that there are languages lacking rich agreement but with pro in object position. Speas accounts for these phenomena by a rule of economy of projection. A second series of papers is concerned with the way in which functional categories derive aspects of sentential interpretation. Three issues in this research program are investigated here: external arguments as arguments of functional projections (Kratzer), the specificity interpretation of clitics (Sportiche), and the interpretation of tense (Stowell). In all three cases, phrase structure is put to use to derive interpretive effects. Angelika Kratzer proposes that external arguments are not part of the verb.