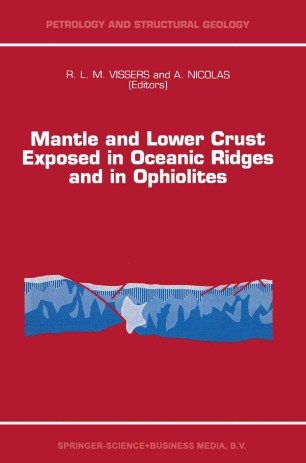 Mantle and Lower Crust Exposed in Oceanic Ridges and in Ophiolites

Contributions to a Specialized Symposium of the VII EUG Meeting, Strasbourg, Spring 1993

This volume follows a Specialized Symposium on "Mantle denudation in slow spreading ridges and in ophiolites", held at the XII EUG Meeting in Strasbourg, spring 1993. During the meeting it was felt that the contribu­ tions to the Symposium justified a volume presenting its main scientific achievements. The present title of the volume shows that the center of inter­ est has slightly shifted with respect to the initial objective: in order to under­ stand the processes involved in accretion taking place at oceanic ridges, it is crucial to study the interaction between uppermost mantle and lower crust. The approach favored here is that of petrological and structural analysis of oceanic rocks in present-day oceanic ridges combined with similar studies in ophiolites. Rock specimen collected by submersibles or dredge hauls in oceanic ridge environments provide a "ground truth". However, except for areas such as the MARK (Mid-Atlantic Ridge ne ar Kane fracture zone) where, thanks to multiple submersible dives, the local geology is known with aprecision even better than in many onshore ophiolites, mutual rela­ tionships between uppermost mantle and lower crust are poorly known. In contrast, onshore ophiolites provide a necessary large-scale picture built up over many years of structural and petrological mapping.