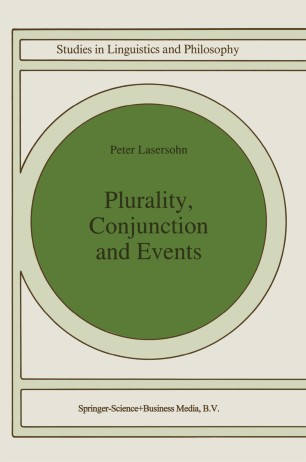 Part of the Studies in Linguistics and Philosophy book series (SLAP, volume 55)

Plurality, Conjunction and Events presents a novel theory of plural and conjoined phrases, in an event-based semantic framework. It begins by reviewing options for treating the alternation between `collective' and `distributive' readings of sentences containing plural or conjoined noun phrases, including analyses from both the modern and the premodern literature. It is argued that plural and conjoined noun phrases are unambiguously group-denoting, and that the collective/distributive distinction therefore must be located in the predicates with which these noun phrases combine. More specifically, predicates must have a hidden argument place for events; the collective/distributive distinction may then be represented in the part/whole structure of these events. This allows a natural treatment of `collectivizing' adverbial expressions, and of `pluractional' affixes; it also allows a unified semantics for conjunction, in which conjoined sentences and predicates denote groups of events, much like conjoined noun phrases denote groups of individuals.