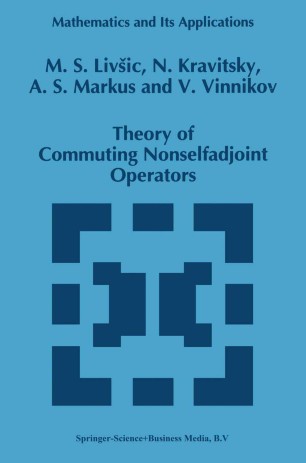 Part of the Mathematics and Its Applications book series (MAIA, volume 332)

Considering integral transformations of Volterra type, F. Riesz and B. Sz.-Nagy no­ ticed in 1952 that [49]: "The existence of such a variety of linear transformations, having the same spectrum concentrated at a single point, brings out the difficulties of characterization of linear transformations of general type by means of their spectra." Subsequently, spectral analysis has been developed for different classes of non­ selfadjoint operators [6,7,14,20,21,36,44,46,54]. It was then realized that this analysis forms a natural basis for the theory of systems interacting with the environment. The success of this theory in the single operator case inspired attempts to create a general theory in the much more complicated case of several commuting operators with finite-dimensional imaginary parts. During the past 10-15 years such a theory has been developed, yielding fruitful connections with algebraic geometry and sys­ tem theory. Our purpose in this book is to formulate the basic problems appearing in this theory and to present its main results. It is worth noting that, in addition to the joint spectrum, the corresponding algebraic variety and its global topological characteristics play an important role in the classification of commuting operators. For the case of a pair of operators these are: 1. The corresponding algebraic curve, and especially its genus. 2. Certain classes of divisors - or certain line bundles - on this curve.