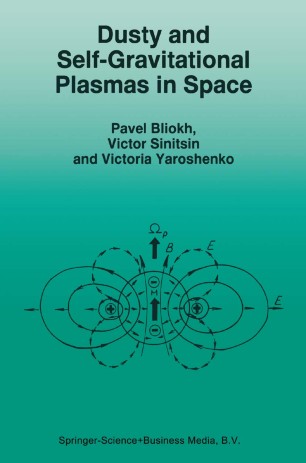 Dusty and Self-Gravitational Plasmas in Space

The diverse and often surprising new facts about planetary rings and comet environments that were reported by the interplanetary missions oflate 1970s - 1980s stimulated investigations of the so-called dusty plasma. The number of scientific papers on the subject that have been published since is quite impressive. Recently, a few surveys and special journal issues have appeared. Time has come to integrate some of the knowledge in a book. Apparently, this is the first monograph on dusty and self-gravitational plasmas. While the circle of pertinent problems is rather clearly defined, not all of them are equally represented here. The authors have concentrated on cooperative phenomena (Le. waves and instabilities) in the dusty plasma and the effects of self-gravitation. At the same time, in an attempt to present the vast material consistently, we have included such topics as electrostatics of the dusty plasma and gravitoelectrodynamics of individual charged particles. Also mentioned are astrophysical implications, mostly concerning planetary rings. We hope that the book shall be of interest and value both to specialists and those (astro )physicists who have just discovered this area of plasma physics. We are thankful to many scientists actively working in the field of dusty plasma physics who have generously let us become acquainted with their results, sometimes prior to publication of their own papers: U. de Angelis, N. D'Angelo, o. Havnes, A. Mendis, M. Rosenberg, P. Shukla, F. Verheest, and E. Wollman.