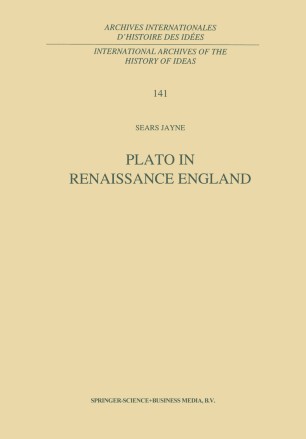 This book offers a radical reappraisal of the reputation of Plato in England between 1423 and 1603. Using many materials not hitherto available, including evidence of book publishing and book ownership, together with a comprehensive survey of allusions to Plato, the author shows that the English were far less interested in Plato than most historians have thought. Although the English, like the French, knew the `court' Plato as well as the `school' Plato, the English published only two works by Plato during this period, while the French published well over 100 editions, including several of the complete Works. In England allusions to Plato occur more often in prose writers such as Whetstone, Green, and Lodge, than in poets like Spenser and Chapman. Sidney did take his `Stella' from Plato, but most English allusions to Plato were taken not directly from Plato or from Ficino, but from other authors, especially Mornay, Nani-Mirabelli, Ricchieri, Steuco, and Tixier.