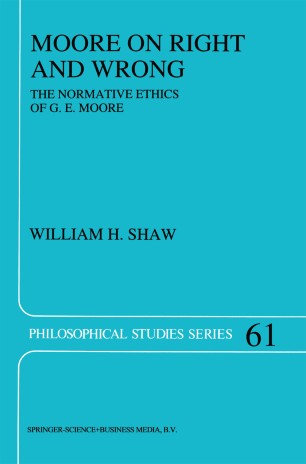 Moore on Right and Wrong

G.E. Moore's work shaped twentieth century ethics. But while his metaethical doctrines have seen decades of debate, little attention has been paid to his normative theory. Yet Moore broke fresh and important ground in elaborating an indirect, sophisticated, and non-hedonistic form of utilitarianism. Moore on Right and Wrong is a critical reconstruction and exposition of this neglected side of his ethical thought. It situates his normative ethics with respect to traditional utilitarianism and assesses Moore's case for consequentialism. The final chapters explore in detail the implications of Moore's theory for individual moral conduct -- in particular, his denial of self-evident moral rules; his skepticism about knowledge of one's duty; his attempt to establish the validity of certain moral rules; and his account of what moral agents should do in situations where such rules apply and in situations where they do not.