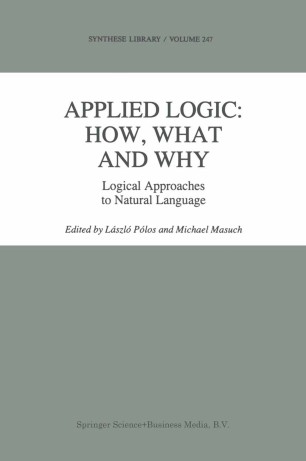 Applied Logic: How, What and Why

A selection of papers presented at the international conference `Applied Logic: Logic at Work', held in Amsterdam in December 1992. Nowadays, the term `applied logic' has a very wide meaning, as numerous applications of logical methods in computer science, formal linguistics and other fields testify. Such applications are by no means restricted to the use of known logical techniques: at its best, applied logic involves a back-and-forth dialogue between logical theory and the problem domain.
The papers focus on the application of logic to the study of natural language, in syntax, semantics and pragmatics, and the effect of these studies on the development of logic. In the last decade, the dynamic nature of natural language has been the most interesting challenge for logicians. Dynamic semantics is here applied to new topics, the dynamic approach is extended to syntax, and several methodological issues in dynamic semantics are systematically investigated. Other methodological issues in the formal studies of natural language are discussed, such as the need for types, modal operators and other logical operators in the formal framework. Further articles address the scope of these methodological issues from other perspectives ranging from cognition to computation.
The volume presents papers that are interesting for graduate students and researchers in the field of logic, philosophy of language, formal semantics and pragmatics, and computational linguistics.