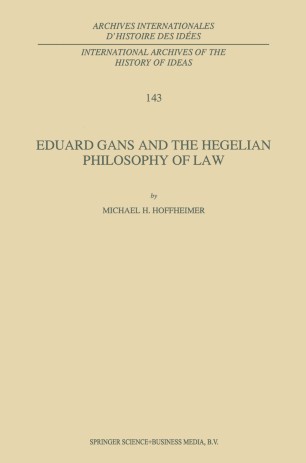 Eduard Gans and the Hegelian Philosophy of Law

Gans ranks at the head of that important group of Hegelian thinkers that bridged the generations of Hegel and Marx. ! Yet there is a large gap between Gans 's historical importance and the scholarship on him. Despite a renewal of interest in Gans's work on the Continent,2 Gans remains almost completely unknown to English-Ianguage scholars, and almost none ofhis work has been 3 previously translated. His Prefaces to his posthumous editions of Hegel's writings are inaccessib1e to English speakers, despite the fact that they shed important light on the authenticity of the so-called Additions to those texts. His Preface to Hegel's Philosophy ofLaw has never been translated before, while his Preface to the Philosophy of History has been omitted from reprintings 4 for generations. Moreover, the recent scholarship on the Continent has focused on Gans 's political and philosophical rather than his legal writings. There is little dis­ cussion in any language ofhis system oflaw, which is the focus ofthe present study. Some of the reasons for the neglect of Gans are obvious. Gans cannot be a hero for most readers today. He accepted apostasy as a means to profes­ sional advancement. And though more liberal than Hegel, Gans nonetheless accommodated himself to the results of the Restoration and evaded political persecution that might have kindled the sympathy of later generations.