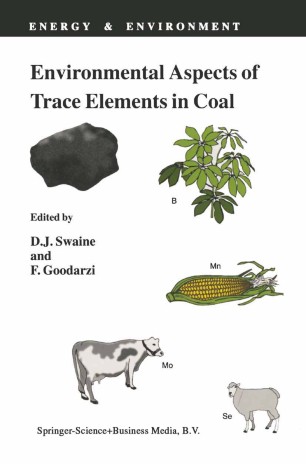 Happy he who could learn the causes of things (Virgil, Georgics 11) There is clearly a place for a book on the environmental aspects of trace elements in coal, especially with the increasing use of coal for power production. Our aim is to provide relevant background information and to update the situation regarding trace elements during beneficiation, combustion, .atmospheric deposition, leaching from wastes anti reclamation. The outcome is a balanced account of the overall situation. The initial chapter gives the rationale behind the planning of the book and puts the topics into the context of trace elements in the environment, while the final chapter summarises the subject matter and conclusions of each chapter. The choice of authors was based on their specialised knowledge. Although every effort has been made to ensure uniformity in layout, use of units, references and the like, authors have been given some latitude in expression and their styles have not been curbed. This book is intended primarily for coal scientists and technologists involved in environmental aspects of trace elements during the mining of coal, its beneficiation and usage, especially for power generation, and for regulatory bodies. It is considered to be suitable for relevant postgraduate courses. Just as it has been said that one of Bruckner's symphonies has enough melodies for a Beethoven to have written ten symphonies, so this book has several chapters that could be themes for other books.