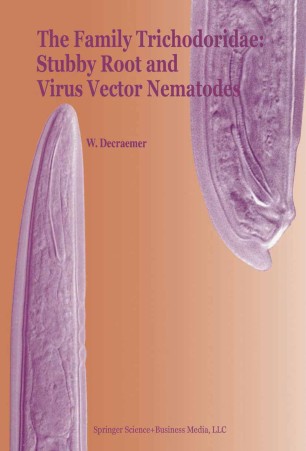 The family Trichodoridae was established by Thorne in 1935 but it remained of limited taxonomie interest until 1951 when Christie and Perry associated Trichodorus christie (now Paratrichodorus minor) with a "stubby root disease" that affected certain crops in Florida, USA and interest further increased from 1960 when P. pachydermus was implicated as a vector of the economically important tobacco raule virus. Such discoveries gave an impetus to studies on many aspects of the biology of trichodorid nematodes with a consequent proliferation of new species described from different parts of the world. The number of species increased from twelve in 1957 to a present day total exceeding eighty. This rapid expansion in the number of species was accompanied by several reappraisals of the taxonomy and systematies of the family, the most notable changes being the creation of the genus Paratrichodorus by Siddiqi in 1974 and the recognition of the monodelphic genera Monotrichodorus and Allotrichodorus respectively by Andrassy in 1976 and Rodriguez-M, Sher and Siddiqi in 1978. Reliable and unambiguous identification of taxa is dependent on the known reliability of a range of characters, whieh remains of paramount importance in taxonomy even when biochemical and molecular methodology is available. In this book each of the species, including synonyms and species inquirenda, that comprise the family Trichodoridae is re-described from meticulous mieroscopie examination of type specimens, material from official nematode collections and populations in the field.