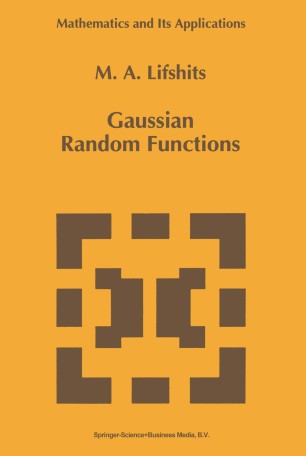 Part of the Mathematics and Its Applications book series (MAIA, volume 322)

It is well known that the normal distribution is the most pleasant, one can even say, an exemplary object in the probability theory. It combines almost all conceivable nice properties that a distribution may ever have: symmetry, stability, indecomposability, a regular tail behavior, etc. Gaussian measures (the distributions of Gaussian random functions), as infinite-dimensional analogues of tht< classical normal distribution, go to work as such exemplary objects in the theory of Gaussian random functions. When one switches to the infinite dimension, some "one-dimensional" properties are extended almost literally, while some others should be profoundly justified, or even must be reconsidered. What is more, the infinite-dimensional situation reveals important links and structures, which either have looked trivial or have not played an independent role in the classical case. The complex of concepts and problems emerging here has become a subject of the theory of Gaussian random functions and their distributions, one of the most advanced fields of the probability science. Although the basic elements in this field were formed in the sixties-seventies, it has been still until recently when a substantial part of the corresponding material has either existed in the form of odd articles in various journals, or has served only as a background for considering some special issues in monographs.