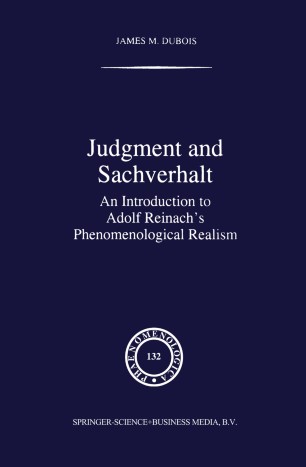 Adolf Reinach was one of the leading figures of the Munich and Göttingen circles of phenomenology, and Husserl's first real co-worker. Although his writings are highly original and remarkably clear, Reinach's tragic death in the First World War prevented him from formulating a definitive statement of his phenomenology, leaving his name virtually unknown to all but a small circle.
In his ground-breaking study, Judgment and Sachverhalt, DuBois shows how Reinach succeeds in developing a realist ontology and epistemology based on rigorous argumentation and phenomenological elucidation. Drawing from numerous texts and the developments of Reinach's students and colleagues - Roman Ingarden, Alexander Pfänder and Dietrich von Hildebrand above all - DuBois presents, refines and defends Reinach's `phenomenological realism'. Confrontations of Reinach's theories of states of affairs, concepts and speech acts with the work of contemporary authors like Chisholm and Searle allow readers to evaluate Reinach's philosophy, not only in the light of the later developments of Husserl, but also in the light of certain Anglo-American developments.