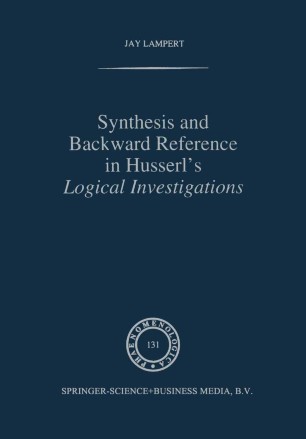 In the sixth Logical Investigation, Husserl defines meaning, objectivity, and knowledge by appealing to "syntheses of fulfilment": each act of conscious­ ness has a meaning-intention whereby it anticipates a range of fulfilling intuitions, whose ongoing synthesis would identify intended objects in the face of their changing appearances. Synthesis is essential to phenomenological description. But what does it mean to say that one experience is combined with others? This monograph is a speculative-exegetical Husserlian analysis of the ground, the mechanisms, and the results of synthesis. Focusing on Husserl's Logical Investigations, I argue that synthesizing consciousness must be a self-propelling, self-explicating system of interpretative acts driven by ongoing forward and backward references, grounding its structures as it proceeds, and positing its origins as that which must have been given "in advance". To this end, I develop a dialectical reading of Husserl's largely untreated category of "referring backward" (zurückweisen). Treatments of Husserl's concept of synthesis have tended to focus on Husserl's later work on passive synthesis. By drawing out the centrality of the concept of synthesis in the Logical Investigations, I show how synthesis is at the foundation of intentionality as such, and also indicate the continuity of descriptive categories that run through both the early and the late Husserl. The Introduction to this study schematizes the modem history of the concept of synthesis, and reviews the secondary literature on Husserl's concept of synthesis.