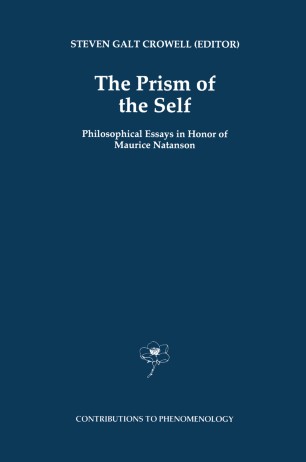 The Prism of the Self

Part of the Contributions to Phenomenology book series (CTPH, volume 19)

This volume contains sOOeen essays written by his students and colleagues in honor of Maurice Natanson. The essays explore some of the diverse themes Professor Natanson has pursued through forty years of teaching and philosophizing in the tradition of existential phenomenology. Because it also includes a lengthy biographical and philosophical interview where one can find an absorbing account of Natanson's Lebens/au/in his own words, there is no need to detail that polypragmatic career here. Suffice to say that even passing acquaintance with the man and the work will reveal that Edmund Husserl's self-description holds equally of his distinguished interpreter: "I seek not to instruct but only to lead, to point out and describe what I see. I claim no other right than that of speaking according to my best lights, principally before myself but in the same manner also before others, as one who has lived in all its seriousness the fate of a philosophical existence. "l For Natanson, as the diversity of the contributions to this volume attest, such seriousness involves something other than that narrow technical vision for which a topic is the more philosophical the less it has to do with anything else. In Natanson's pages-to say nothing of his teaching and conversation-there are no men of straw but living, breathing human beings; with hirn philosophy's tentacles are ubiquitous.