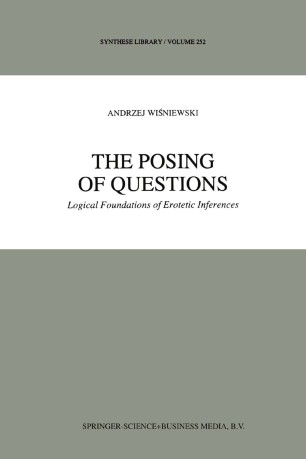 The Posing of Questions

This book is a study in the logic of questions (sometimes called erotetic logic). The central topics in erotetic logic have been the structure of questions and the question-answer relationship. This book doesn't neglect these problems, but much of it is focussed on other issues. The main subject is the logical analysis of certain relations between questions and the contexts of their appearance. And our aim is to elaborate the conceptual apparatus of the inferential approach to the logic of questions. Questions are asked for many reasons and for different purposes. Yet, before a question is asked or posed, a questioner must arrive at it. In many cases arriving at a question resembles coming to a conclusion: there are some premises involved and some inferential thought processes take place. If we agree that a conclusion need not be "conclusive", we may say that sometimes questions can play the role of conclusions. But questions can also perform the role of premises: we often pass from some "initial" question to another question. In other words, there are inferential thought processes - we shall call them erotetic inferences - in which questions play the roles of conclusions or conclusions and premises. The inferential approach to the logic of questions focusses its attention on the analysis of erotetic inferences. This book consists of eight chapters.