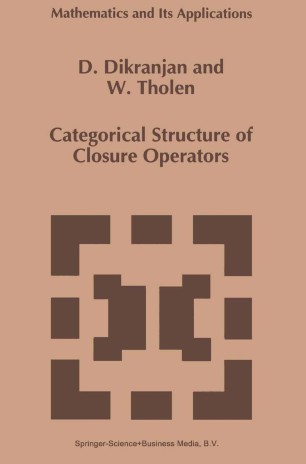 With Applications to Topology, Algebra and Discrete Mathematics

Part of the Mathematics and Its Applications book series (MAIA, volume 346)

Our motivation for gathering the material for this book over aperiod of seven years has been to unify and simplify ideas wh ich appeared in a sizable number of re­ search articles during the past two decades. More specifically, it has been our aim to provide the categorical foundations for extensive work that was published on the epimorphism- and cowellpoweredness problem, predominantly for categories of topological spaces. In doing so we found the categorical not ion of closure operators interesting enough to be studied for its own sake, as it unifies and describes other significant mathematical notions and since it leads to a never-ending stream of ex­ amples and applications in all areas of mathematics. These are somewhat arbitrarily restricted to topology, algebra and (a small part of) discrete mathematics in this book, although other areas, such as functional analysis, would provide an equally rich and interesting supply of examples. We also had to restrict the themes in our theoretical exposition. In spite of the fact that closure operators generalize the uni­ versal closure operations of abelian category theory and of topos- and sheaf theory, we chose to mention these aspects only en passant, in favour of the presentation of new results more closely related to our original intentions. We also needed to refrain from studying topological concepts, such as compactness, in the setting of an arbitrary closure-equipped category, although this topic appears prominently in the published literature involving closure operators.