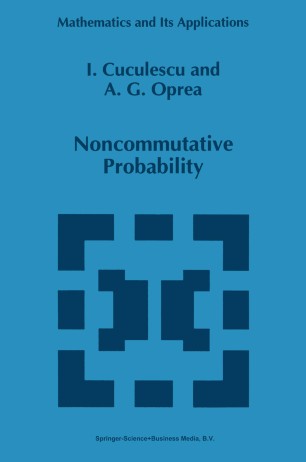 Part of the Mathematics and Its Applications book series (MAIA, volume 305)

The intention of this book is to explain to a mathematician having no previous knowledge in this domain, what "noncommutative probability" is. So the first decision was not to concentrate on a special topic. For different people, the starting points of such a domain may be different. In what concerns this question, different variants are not discussed. One such variant comes from Quantum Physics. The motivations in this book are mainly mathematical; more precisely, they correspond to the desire of developing a probability theory in a new set-up and obtaining results analogous to the classical ones for the newly defined mathematical objects. Also different mathematical foundations of this domain were proposed. This book concentrates on one variant, which may be described as "von Neumann algebras". This is true also for the last chapter, if one looks at its ultimate aim. In the references there are some papers corresponding to other variants; we mention Gudder, S.P. &al (1978). Segal, I.E. (1965) also discusses "basic ideas".