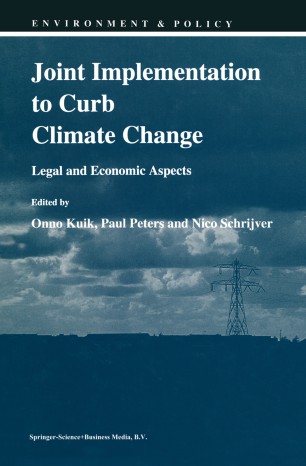 This book is about joint implementation. It addresses legal, economic and institutional questions which should be taken into account in setting up joint implementation projects and in developing criteria for joint implementation under the UN Framework Convention on Climate Change (FCCC). First, however, before going into any detail, we shall briefly sketch the background, quoting Daniel Bodansky: 'Each year, mankind injects approximately six billion tons of carbon into the atmosphere from the burning of fossil fuels, as well as a substantial (although still uncertain) amount from deforestation. Since the advent of the industrial revolution, atmospheric concentrations of carbon dioxide have risen by more than twenty­ five percent, from 280 to more than 350 parts per million. Scientists estimate that if current patterns of emissions continue unchecked, the increasing concentrations of carbon dioxide, together with parallel increases in other trace gases such as methane and nitrous oxide, will cause an average global warming in the range of 0. 2 to 0. 5 °C per decade, or 2 to 5 oc by the end of the next century. Such a temperature rise, more rapid than at any time in human history, could have severe effects on coastal areas, agriculture, forests 1 and human health. ' In recent years there has been growing awareness of the extent of the damage done to the world's environment through unsustainable patterns of development.