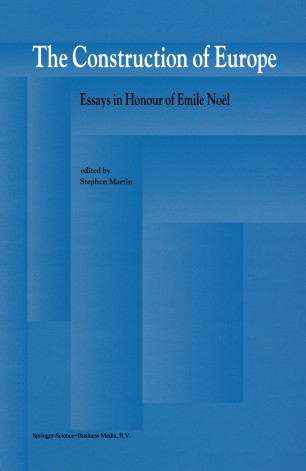 The Construction of Europe

Essays in Honour of Emile Noël

Stephen Martin* The fourteen essays that constitute this work provide a coherent review of the past and present of the European Community, and consider some of its possible futures. Werner Abelshauser and Richard Griffiths offer separate perspectives on the precursors of the European Community. Abelshauser argues that comparison of the fates of the European Coal and Steel Community and the European Defense Community demonstrate the dominance of political over economic considerations in the integration process. Griffiths considers the stillborn European Political Community, many of the proposed features of which, somewhat transformed, were embodied in the Treaty of Rome. Both suggest that as a practical matter a coming together of French and German interests has been a precondition for advances in European integration. Stephen Martin and Andrew Evans discuss the development of the Com­ munity's Structural Funds, first envisaged as tools to smooth the transition from a collection of regional economies to a continent-wide single market, now increasingly seen as devices to guide adjustment to long-term struc­ tural problems. Stuart Holland emphasizes the role of the Structural Funds as one element in a broad range of strategies to ensure social and economic cohesion as the Maastrict Treaty ushers the European Union into the next stage of its development.