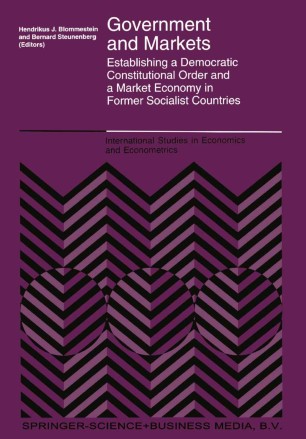 Part of the International Studies in Economics and Econometrics book series (ISEE, volume 32)

Government and Markets is the first book to tackle systematically and in a multidisciplinary fashion the role of democratic governments during and after the transition from plan to market. The role of governments during the transformation is important for eliminating the obstacles and putting into place the conditions for the emergence of a viable market economy. Moreover, governments need to play a key role in establishing a political-legal order that promotes political liberties and economic freedom. In contrast to other literature on the transformation process in formerly planned systems, this volume focuses also on the creation of autonomous and accountable governments as part of the liberal economic order. Finally, the volume analyzes the role of the legal state in creating a competitive market economy.
Government and Markets addresses itself to scholars, politicians policy makers interested in the establishment of a democratic, competitive order in formerly planned political economic systems.