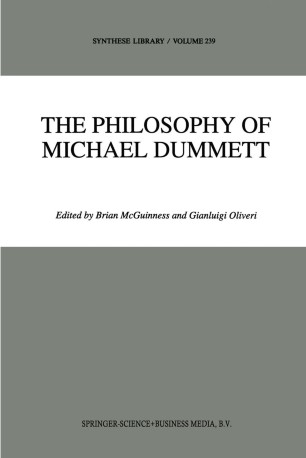 The Philosophy of Michael Dummett

The present collection of papers derives from a philosophy conference organised in the Sicilian town of M ussomeli in September 1991. The con­ ference aimed at providing an analysis of certain aspects of the thought of Michael Dummett, whose contributions have been very influential in several aspects of the philosophical debate continuing within the analyt­ ical tradition. Logic, the philosophy of mathematics, the interpretation of Frege's philosophy, and metaphysics are only some of the areas within which Dummett's ideas have been fruitful over the years. The papers contained in this book, and Dummett's replies, will, it is hoped, not merely offer a partial reconstruction of a philosopher's life­ work, but provide an exciting and challenging vantage point from which to look at some of the main problems of contemporary philosophy. The First International Philosophy Conference of M ussomeli - this is what the conference was called - was an extraordinary event in many ways. The quality of the papers presented, the international reputa­ tion of many of the participants, the venue itself, together with the unavoidable, and sometimes quite funny, organisational hiccups, made that meeting memorable. Perhaps principally memorable was the warmth and sympathy of the people of Mussomeli who strongly supported and encouraged this initia­ tive. A special mention is also due to the City Council Administrators, who spared no effort to make the Conference a success.