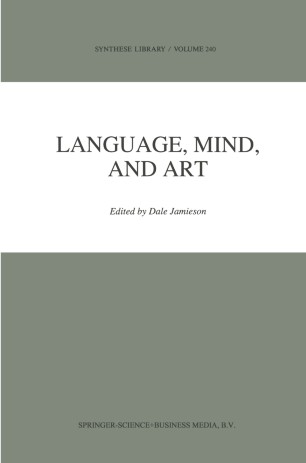 Essays in Appreciation and Analysis, in Honor of Paul Ziff

This book is a collection of essays in honor of Paul Ziff written by his col­ leagues, students, and friends. Many of the authors address topics that Ziff has discussed in his writings: understanding, rules and regularities, proper names, the feelings of machines, expression, and aesthetic experience. Paul Ziff began his professional career as an artist, went on to study painting with J. M. Hanson at Cornell, and then studied for the Ph. D. in philosophy, also at Cornell, with Max Black. Over the next three decades he produced a series of remarkable papers in philosophy of art, culminating in 1984 with the publica­ tion of Antiaesthetics: An Appreciation of the Cow with the Subtile Nose. In 1960 he published Semantic Analysis, his masterwork in philosophy of lan­ guage. Throughout his career he made important contributions to philosophy of mind in such papers as "The Simplicity of Other Minds" (1965) and "About Behaviourism" (1958). In addition to his work in these areas, his lec­ tures at Harvard on philosophy of religion are an underground classic; and throughout his career he has continued to make art and to search for the meaning of life in the properties of prime numbers. Although his interests are wide and deep, questions about language, art, and mind have dominated his philosophical work, and it is problems in these areas that provide the topics of most of the essays in this volume.