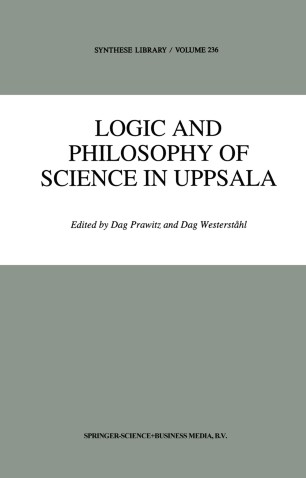 Papers from the 9th International Congress of Logic, Methodology and Philosophy of Science

The International Congresses of Logic, Methodology and Philosophy of Science, which are held every fourth year, give a cross-section of ongoing research in logic and philosophy of science. Both the invited lectures and the many contributed papers are conductive to this end. At the 9th Congress held in Uppsala in 1991 there were 54 invited lectures and around 650 contributed papers divided into 15 different sections. Some of the speakers who presented contributed papers that attracted special interest were invited to submit their papers for publication, and the result is the present volume. A few papers appear here more or less as they were presented at the Congress whereas others are expansions or elaborations of the talks given at the Congress. A selection of this kind, containing 38 papers drawn from the 650 contributed papers presented at the Uppsala Congress, cannot do justice to all facets of the field as it appeared at the Congress. But it should allow the reader to get a representative survey of contemporary research in large areas of philosophical logic and philosophy of science. About half of the papers of the volume appear in sections listed at the Congress under the heading Philosophical and Foundational Problems about the Sciences. The section Foundations of Logic, Mathematics and Computer Science is represented by three papers, Foundations of Physical Sciences by six papers, Foundations of Biological Sciences by three papers, Foundations of Cognitive Science and AI by one paper, and Foundations of Linguistics by three papers.