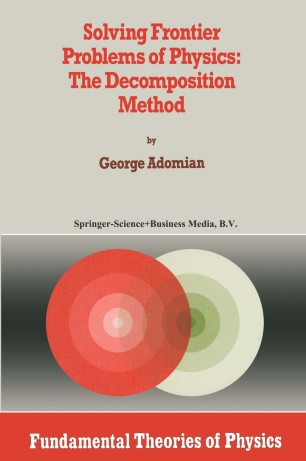 The Adomian decomposition method enables the accurate and efficient analytic solution of nonlinear ordinary or partial differential equations without the need to resort to linearization or perturbation approaches. It unifies the treatment of linear and nonlinear, ordinary or partial differential equations, or systems of such equations, into a single basic method, which is applicable to both initial and boundary-value problems.
This volume deals with the application of this method to many problems of physics, including some frontier problems which have previously required much more computationally-intensive approaches.
The opening chapters deal with various fundamental aspects of the decomposition method. Subsequent chapters deal with the application of the method to nonlinear oscillatory systems in physics, the Duffing equation, boundary-value problems with closed irregular contours or surfaces, and other frontier areas. The potential application of this method to a wide range of problems in diverse disciplines such as biology, hydrology, semiconductor physics, wave propagation, etc., is highlighted.
For researchers and graduate students of physics, applied mathematics and engineering, whose work involves mathematical modelling and the quantitative solution of systems of equations.