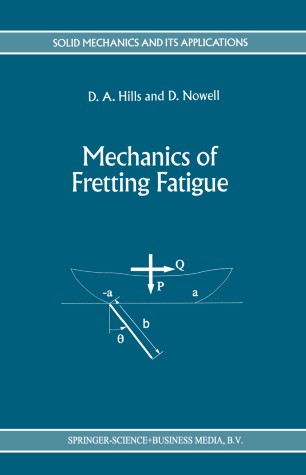 Part of the Solid Mechanics and Its Applications book series (SMIA, volume 30)

Failures of many mechanical components in service result from fatigue. The cracks which grow may either originate from some pre-existing macroscopic defect, or, if the component is of high integrity but highly stressed, a region of localized stress concentration. In turn, such concentrators may be caused by some minute defect, such as a tiny inclusion, or inadvertent machining damage. Another source of surface damage which may exist between notionally 'bonded' components is associated with minute relative motion along the interface, brought about usually be cyclic tangential loading. Such fretting damage is quite insidious, and may lead to many kinds of problems such as wear, but it is its influence on the promotion of embryo cracks with which we are concerned here. When the presence of fretting is associated with decreased fatigue performance the effect is known as fretting fatigue. Fretting fatigue is a subject drawing equally on materials science and applied mechanics, but it is the intention in this book to concentrate attention entirely on the latter aspects, in a search for the quantification of the influence of fretting on both crack nucleation and propagation. There have been very few previous texts in this area, and the present volume seeks to cover five principal areas; (a) The modelling of contact problems including partial slip under tangentialloading, which produces the surface damage. (b) The modelling of short cracks by rigorous methods which deal effectively with steep stress gradients, kinking and closure. (c) The experimental simulation of fretting fatigue.