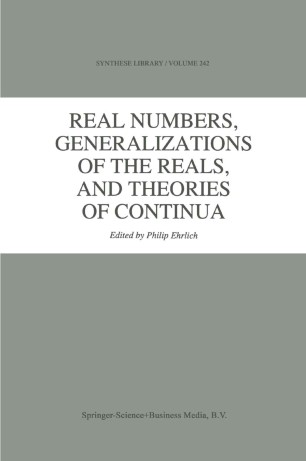 Real Numbers, Generalizations of the Reals, and Theories of Continua

Since their appearance in the late 19th century, the Cantor--Dedekind theory of real numbers and philosophy of the continuum have emerged as pillars of standard mathematical philosophy. On the other hand, this period also witnessed the emergence of a variety of alternative theories of real numbers and corresponding theories of continua, as well as non-Archimedean geometry, non-standard analysis, and a number of important generalizations of the system of real numbers, some of which have been described as arithmetic continua of one type or another.
With the exception of E.W. Hobson's essay, which is concerned with the ideas of Cantor and Dedekind and their reception at the turn of the century, the papers in the present collection are either concerned with or are contributions to, the latter groups of studies. All the contributors are outstanding authorities in their respective fields, and the essays, which are directed to historians and philosophers of mathematics as well as to mathematicians who are concerned with the foundations of their subject, are preceded by a lengthy historical introduction.