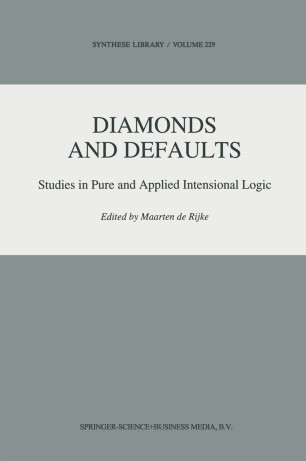 This volume contains a selection of papers presented at a Seminar on Intensional Logic held at the University of Amsterdam during the period September 1990-May 1991. Modal logic, either as a topic or as a tool, is common to most of the papers in this volume. A number of the papers are con­ cerned with what may be called well-known or traditional modal systems, but, as a quick glance through this volume will reveal, this by no means implies that they walk the beaten tracks. In­ deed, such contributions display new directions, new results, and new techniques to obtain familiar results. Other papers in this volume are representative examples of a current trend in modal logic: the study of extensions or adaptations of the standard sys­ tems that have been introduced to overcome various shortcomings of the latter, especially their limited expressive power. Finally, there is another major theme that can be discerned in the vol­ ume, a theme that may be described by the slogan 'representing changing information. ' Papers falling under this heading address long-standing issues in the area, or present a systematic approach, while a critical survey and a report contributing new techniques are also included. The bulk of the papers on pure modal logic deal with theoreti­ calor even foundational aspects of modal systems.