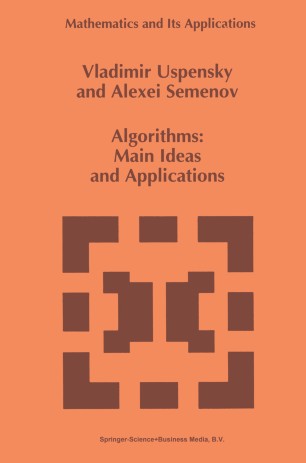 Part of the Mathematics and Its Applications book series (MAIA, volume 251)

Today the notion of the algorithm is familiar not only to mathematicians. It forms a conceptual base for information processing; the existence of a corresponding algorithm makes automatic information processing possible. The theory of algorithms (together with mathematical logic ) forms the the­ oretical basis for modern computer science (see [Sem Us 86]; this article is called "Mathematical Logic in Computer Science and Computing Practice" and in its title mathematical logic is understood in a broad sense including the theory of algorithms). However, not everyone realizes that the word "algorithm" includes a transformed toponym Khorezm. Algorithms were named after a great sci­ entist of medieval East, is al-Khwarizmi (where al-Khwarizmi means "from Khorezm"). He lived between c. 783 and 850 B.C. and the year 1983 was chosen to celebrate his 1200th birthday. A short biography of al-Khwarizmi compiled in the tenth century starts as follows: "al-Khwarizmi. His name is Muhammad ibn Musa, he is from Khoresm" (cited according to [Bul Rozen Ah 83, p.8]).