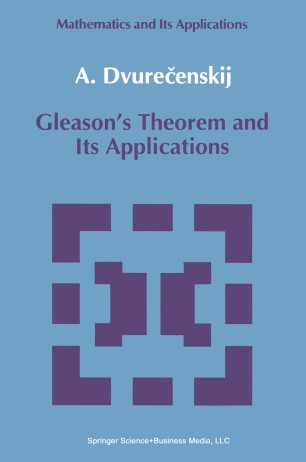 Gleason’s Theorem and Its Applications

Part of the Mathematics and Its Applications book series (MAEE, volume 60)

For many years physics and mathematics have had a fruitful influence on one another. Classical mechanics and celestial mechanics have produced very deep problems whose solutions have enhanced mathematics. On the other hand, mathematics itself has found interesting theories which then (sometimes after many years) have been reflected in physics, confirming the thesis that nothing is more practical than a good theory. The same is true for the younger physical discipline -of quantum mechanics. In the 1930s two events, not at all random, became: The mathematical back­ grounds of both quantum mechanics and probability theory. In 1936, G. Birkhoff and J. von Neumann published their historical paper "The logic of quantum mechanics", in which a quantum logic was suggested. The mathematical foundations of quantum mechanics remains an outstanding problem of mathematics, physics, logic and philosophy even today. The theory of quantum logics is a major stream in this axiomatical knowledge river, where L(H), the system of all closed subspaces of a Hilbert space H, due to J. von Neumann, plays an important role. When A.M. Gleason published his solution to G. Mackey's problem showing that any state (= probability measure) corresponds to a density operator, he probably did not anticipate that his solution would become a cornerstone of ax iomati cal theory of quantum mechanics nor that it would provide many interesting applications to mathematics.