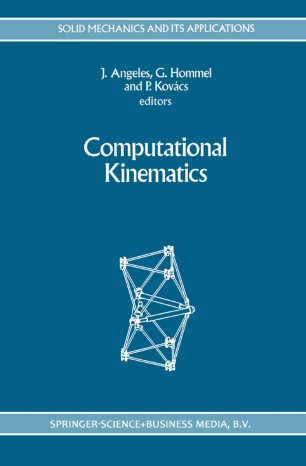 Part of the Solid Mechanics and Its Applications book series (SMIA, volume 28)

The aim of this book is to provide an account of the state of the art in Com­ putational Kinematics. We understand here under this term ,that branch of kinematics research involving intensive computations not only of the numer­ ical type, but also of a symbolic nature. Research in kinematics over the last decade has been remarkably ori­ ented towards the computational aspects of kinematics problems. In fact, this work has been prompted by the need to answer fundamental question­ s such as the number of solutions, whether real or complex, that a given problem can admit. Problems of this kind occur frequently in the analysis and synthesis of kinematic chains, when finite displacements are considered. The associated models, that are derived from kinematic relations known as closure equations, lead to systems of nonlinear algebraic equations in the variables or parameters sought. What we mean by algebraic equations here is equations whereby the unknowns are numbers, as opposed to differen­ tial equations, where the unknowns are functions. The algebraic equations at hand can take on the form of multivariate polynomials or may involve trigonometric functions of unknown angles. Because of the nonlinear nature of the underlying kinematic models, purely numerical methods turn out to be too restrictive, for they involve iterative procedures whose convergence cannot, in general, be guaranteed. Additionally, when these methods converge, they do so to only isolated solu­ tions, and the question as to the number of solutions to expect still remains.