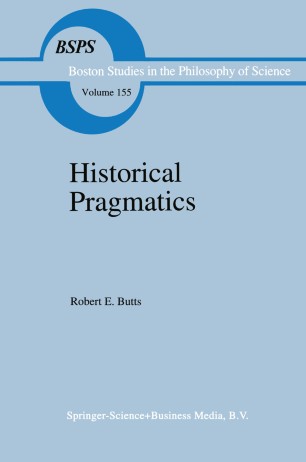 Part of the Boston Studies in the Philosophy of Science book series (BSPS, volume 155)

For 35 years, the critical and creative writings of Robert E. Butts have been a notable and welcome part of European and North American philosophy. A few years ago, James Robert Brown and Jiirgen Mittelstrass feted Professor Butts with a volume entitled An Intimate Relation (Boston Studies vol. 116, 1989), essays by twenty-six philosophers and historians of the sciences. And that joining of philosophers and historians was impressive evidence of the 'intimate relation' between historical illumination and philosophical understanding which is characteristic of Butts throughout his work. Not alone, Butts has been, and is, one of this generation's most incisive thinkers, devoted to responsible textual scholarship and equally responsible imaginative interpretation. Brown and Mittelstrass said that "throughout his writings, science, its philosophy, and its history have been treated as a seamless web", and I would add only that philosophy per se is a part of the web too. Here in this book before us are the results, a lovely collection from the work of Robert Butts, who is for so many of his colleagues, students and readers, Mr. HPS, the model philosophical historian and historical philosopher of the sciences. July 1993 Robert S. Cohen Center for Philosophy and History of Science, Boston University TABLE OF CONTENTS BIBLIOGRAPHICAL NOTE IX INTRODUCTION Xl PART I EARLY MODERN PHILOSOPHY OF SCIENCE 1 1. Some tactics in Galileo's propaganda for the mathematization of scientific experience 3 2.