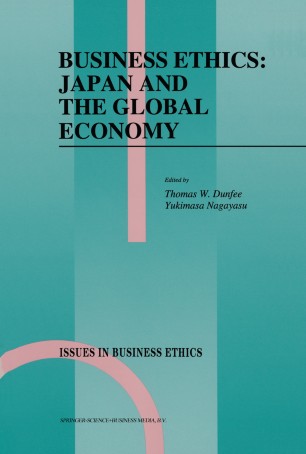 Business Ethics: Japan and the Global Economy presents a multicultural perspective of global business ethics with special emphasis on Japanese viewpoints. In contrast to the typical business ethics book written primarily from the viewpoint of Western culture and economy, the majority of the work is by Asian scholars, providing an historical overview of the religious, scientific and cultural phenomena which converged to create modern Japanese business ethics. Perspectives from socioeconomics, sociology, social contract and applied business ethics contribute to the analysis of moral issues. A new Japanese approach to moral science, Moralogy, is introduced and its implications for phenomena such as the Keiretsu system are explored. Concurrently, prominent Western ethicists explore the role of moral language and the implications of Kantian ethics and contractarian approaches for developing universal moral standards.
Because Japan is an economic superpower, it is critical to understand the hidden economic culture, work ethic, and way of thinking in business. We must realize these are the results of an integration of historical factors, such as Shintoism, Buddhism, Confuctianism and modern Western science and technology. Business Ethics: Japan and the Global Economy provides philosophical and anthropological analyses of the Japanese economic mind, departing from previous stereotyped approaches. Theoretical discussions based upon social contract theory are presented in order to build ethical norms with cross-cultural activity for multinational economic activities. From such a universal stance, practical proposals are presented to transnationalize the Keiretsu system and other Japanese economic institutions.