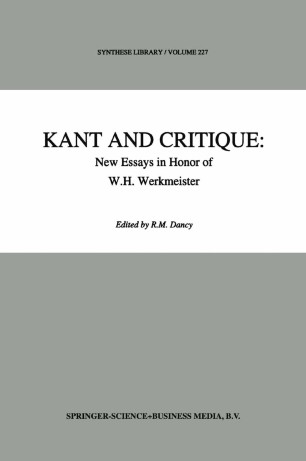 Kant and Critique: New Essays in Honor of W.H. Werkmeister

On 5-6 April 1991, there was a conference on Kant at Florida State University; this volume collects the (revised versions ofthe) papers presented on that occasion. The occasion was, give or take a few months, the 90th birthday of Professor (Emeritus) William H. Werkmeister. Werkie (as all his friends call hirn) hirnself gave the final paper at this conference. Hence the inclusion of a paper by Werkie in a volume honoring hirn. Although he is primarily known for his expertise in the field of Kantian philosophy, Werkie's published scholarship has spanned a wide range of subjects for more than fifty years: his first book, A Philosophy of Science, appeared in 1940; today, among other endeavors, he is at work on a book on Heidegger, and there have been other books and more than a hundred papers in between. Readers interested in fuller biographical information about Werkie should consult the first three papers in the 1 Festschrift celebrating his eightieth hirthday in 1981. Since then, Werkie's activities have continued without much letup. He no longer teaches regularly, hut he gives frequent colloquia in the Philosophy Department here, participates in conferences on Kant around the world, and continues to puhlish, particularly on Kant and Nicolai Hartmann. Wayne McEvilly, 'The Teacher Remembered'; Charles H.