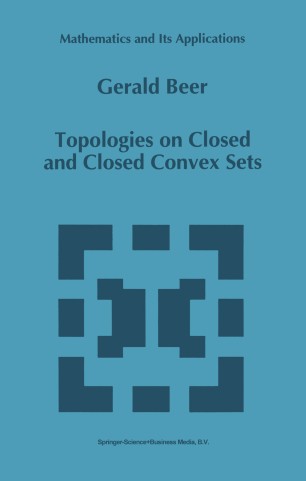 Part of the Mathematics and Its Applications book series (MAIA, volume 268)

This monograph provides an introduction to the theory of topologies defined on the closed subsets of a metric space, and on the closed convex subsets of a normed linear space as well. A unifying theme is the relationship between topology and set convergence on the one hand, and set functionals on the other. The text includes for the first time anywhere an exposition of three topologies that over the past ten years have become fundamental tools in optimization, one-sided analysis, convex analysis, and the theory of multifunctions: the Wijsman topology, the Attouch--Wets topology, and the slice topology. Particular attention is given to topologies on lower semicontinuous functions, especially lower semicontinuous convex functions, as associated with their epigraphs. The interplay between convex duality and topology is carefully considered and a chapter on set-valued functions is included. The book contains over 350 exercises and is suitable as a graduate text.
This book is of interest to those working in general topology, set-valued analysis, geometric functional analysis, optimization, convex analysis and mathematical economics.