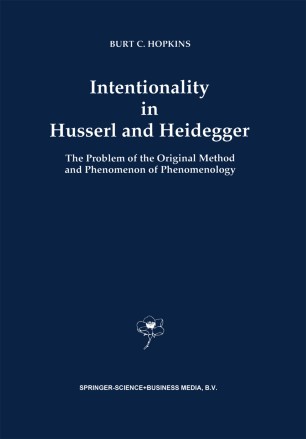 The Problem of the Original Method and Phenomenon of Phenomenology

Part of the Contributions to Phenomenology book series (CTPH, volume 11)

§ 1. Remarks on the Current Status of the Problematic. The literature treating the relationship between the phenomenologies of Husserl and Heidegger has not been kind to Husserl. Heidegger's "devastating" phenomenologically ontological critique of traditional epistemology and ontology, advanced under the rubric of "fundamental ontology" in Being and Time, has almost been universallyl received, despite the paucity of its references to Husserl, as sounding the death knell for Husserl's original formulation of phenomenology. The recent publication of Heidegger's lectures from the period surrounding his composition of Being and Time, lectures that contain detailed references and critical analyses of Husserl's phenomenology, and which, in the words of one respected commentator, Rudolf Bernet, "offer at long last, insight into the principal sources of fundamental ontology,"2 will, if 3 the conclusions reached by the same commentator are any indication, serve only to reinforce the perception of Heidegger's phenomenological /I superiority" over Husserl. This is not to suggest that the tendency toward Heidegger partisan­ ship in the literature treating the relationship of his phenomenology to Husserl's has its basis in extra-philosophical or extra-phenome­ nological concerns and considerations. Rather, it is to draw attention to the undeniable 'fact' that Heidegger's reformulation of Husserl's phenomenology has cast a "spell" over all subsequent discussions of the basic problems and issues involved in what has become known as their "controversy.