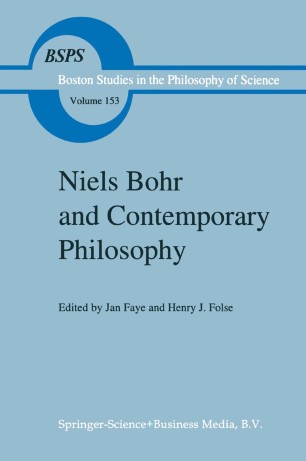 Part of the Boston Studies in the Philosophy of Science book series (BSPS, volume 153)

Since the Niels Bohr centenary of 1985 there has been an astonishing international surge of scholarly analyses of Bohr's philosophy. Now for the first time in Niels Bohr and Contemporary Philosophy Jan Faye and Henry Folse have brought together sixteen of today's leading authors who have helped mould this new round of discussions on Bohr's philosophy. In fifteen entirely new, previously unpublished essays we discover a surprising variety of the different facets of Bohr as the natural philosopher whose `framework of complementarity' shaped the final phase of the quantum revolution and influenced two generations of the century's leading physicists. There is much on which the authors included here agree; but there are also polar disagreements, which assure us that the philosophical questions revolving around Bohr's `new viewpoint' will continue to be a subject of scholarly interest and discussion for years to come.
This collection will interest all serious students of history and philosophy of science, and foundations of physics.