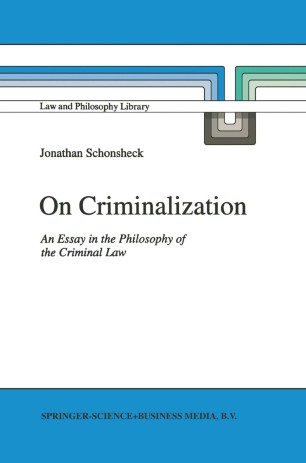 An Essay in the Philosophy of the Criminal Law

I begin by introducing the main issues of the work, and inviting their consideration; as enticement, I offer a sketch of their practical importance, and of the philosophical challenge they present. And I provide a preview of the work's organization and central argument. There is something so obvious that it is easily-and often-overlooked: the enforcing of criminal statutes is the most intrusive and coercive exercise of domestic power by a state. Forcibly preventing people from doing that which they wish to do, forcibly compelling people to do that which they do not wish to do-and wielding force merely attempting to compel or prevent-these state activities have extraordinarily serious ramifications. Indeed, no state institutions are likely to have more profound an impact on the lives of individual citizens than those of the criminal justice system. I endorse Herbert Packer's assessment: The criminal sanction is the law's ultimate threat. Being punished for a crime is different from being regulated in the public interest, or being forced to compensate another who has been injured by one's conduct, or being treated for a disease. The sanction is at once l uniquely coercive and, in the broadest sense, uniquely expensive. As a consequence, these state activities are in special need of moral warrant. Given the great potential for doing grave injustice, the power of the state embodied in the criminal justice system ought not be exercised in the absence of a complete and compelling moral justification.