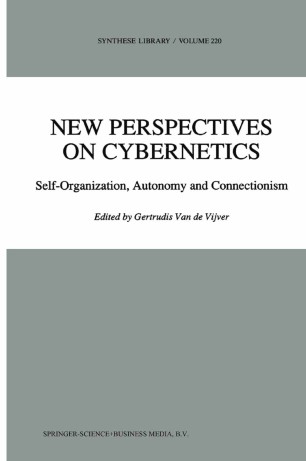 Gertrudis Van de Vijver· Seminar of Logic and Epistemology University of Ghent Before being classified under the fashionable denominators of complexity and chaos, self-organization and autonomy were intensely inquired into in the cybernetic tradition. Despite all rejections that cybernetics has gone through in the second half of this century, today its importance is more and more recognized. Its decisive influence for connectionist theories, autopoietic and constructivist theories, for different forms of applied or experimental epistemology, is being more and more understood and generally accepted. It is mainly due to the success of connectionist models that we observe today a revival of interest for cybernetics. The 1943 article by McCulloch and Pitts is evidently a founding article. Cybernetics has however a much broader interest than the one linked to technical-mathematical details relevant to the construction of networks. For instance, the evolution from first to second order cybernetics, the ways of approaching biological and cognitive phenomena in the latter and the limits that were formulated there, are particularly meaningful to understand current developments and divergences in connectionism. A nuanced picture of cybernetic's history and its present state is therefore clearly epistemologically essential.