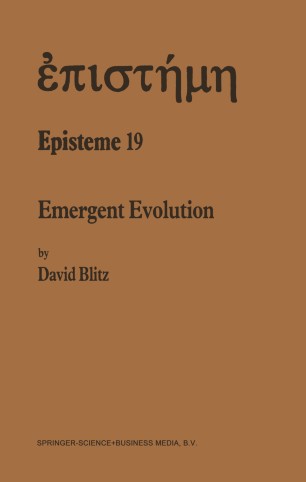 Qualitative Novelty and the Levels of Reality

Emergent evolution combines three separate but related claims, whose background, origin, and development I trace in this work: firstly, that evolution is a universal process of change, one which is productive of qualitative novelties; secondly, that qualitative novelty is the emergence in a system of a property not possessed by any of its parts; and thirdly, that reality can be analyzed into levels, each consisting of systems characterized by significant emergent properties. In part one I consider the background to emergence in the 19th century discussion of the philosophy of evolution among its leading exponents in England - Charles Darwin, Herbert Spencer, T. H. Huxley, Alfred Russel Wallace, and G. J. Romanes. Unlike the scientific aspect of the debate which aimed to determine the factors and causal mechanism of biological evolution, this aspect of the debate centered on more general problems which form what I call the "philosophical framework for evolutionary theory." This considers the status of continuity and discontinuity in evolution, the role of qualitative and quantitative factors in change, the relation between the organic and the inorganic, the relation between the natural and the supernatural, the mind-body problem, and the scope of evolution, including its extension to ethics and morals.