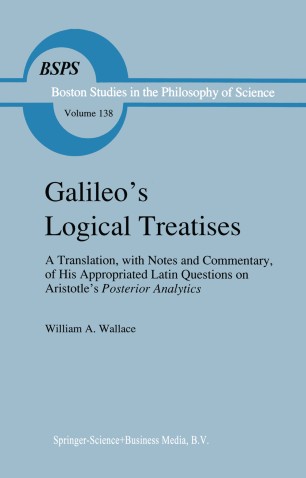 A Translation, with Notes and Commentary, of His Appropriated Latin Questions on Aristotle’s Posterior Analytics

Part of the Boston Studies in the Philosophy of Science book series (BSPS, volume 138)

Hard as it is to believe, what is possibly Galileo's most important Latin manuscript was not transcribed for the National Edition of his works and so has remained hidden from scholars for centuries. In this volume William A. Wallace translates the logical treatises contained in that manuscript and makes them intelligible to the modern reader. He prefaces his translation with a lengthy introduction describing the contents of the manuscript, the sources from which it derives, its dating, and how it relates to Galileo's other Pisan writings. The translation is accompanied by extensive notes and commentary; these explain the text and tie it to the fuller exposition of Galileo's logical methodology in the author's companion volume, Galileo's Logic of Discovery and Proof.
The result is a research tool that is indispensable for anyone intent on understanding Galileo's logic as described in that volume and the documentary evidence on which it is based.