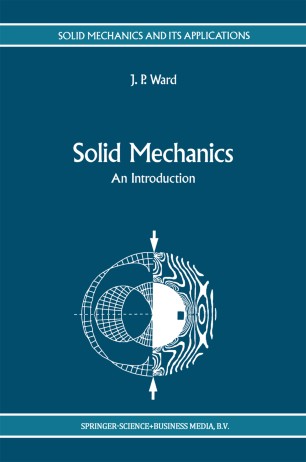 Part of the Solid Mechanics and Its Applications book series (SMIA, volume 15)

This book is intended as an introductory text on Solid Mechanics suitable for engineers, scientists and applied mathematicians. Solid mechanics is treated as a subset of mathematical engineering and courses on this topic which include theoretical, numerical and experimental aspects (as this text does) can be amongst the most interesting and accessible that an undergraduate science student can take. I have concentrated entirely on linear elasticity being, to the beginner, the most amenable and accessible aspect of solid mechanics. It is a subject with a long history, though its development in relatively recent times can be traced back to Hooke (circa 1670). Partly because of its long history solid mechanics has an 'old fashioned' feel to it which is reflected in numerous texts written on the subject. This is particularly so in the classic text by Love (A Treatise on the Mathematical Theory of Elasticity 4th ed., Cambridge, Univ. Press, 1927). Although there is a wealth of information in that text it is not in a form which is easily accessible to the average lecturer let alone the average engineering student. This classic style avoiding the use of vectors or tensors has been mirrored in many other more 'modern' texts.