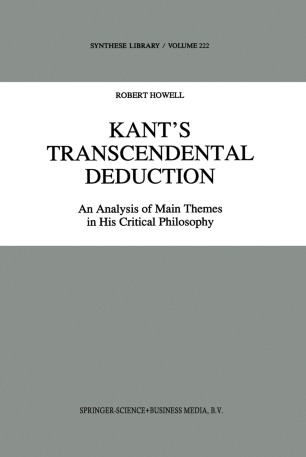 An Analysis of Main Themes in His Critical Philosophy

The argument of the Transcendental Deduction of the Categories in the Critique of Pure Reason is the deepest and most far-reaching in philosophy. In his new book, Robert Howell interprets main themes of the Deduction using ideas from contemporary philosophy and intensional logic, thereby providing a keener grasp of Kant's many subtleties than has hitherto been available. No other work pursues Kant's argument through every twist and turn with the careful, logically detailed attention maintained here. Surprising new accounts of apperception, the concept of an object, the logical functions of thought, the role of the Metaphysical Deduction, and Kant's relations to his Aristotelian-Cartesian background are developed. Howell makes a precise contribution to the discussion of most of the disputed issues in the history of Deduction interpretation. Controversial in its conclusions, this book demands the attention of all who take seriously the task of understanding Kant's work and evaluating it dispassionately.

`Howell brings a sophisticated understanding of modern work in logic and the philosophy of language to bear on the most difficult and central texts of the Kantian corpus. He has a complete command of the Kantian texts - both the major texts and the ancillary ones - and he deploys it with great taste and understatement, so that one never feels as though one is being treated to a display of scholarship for its own sake. In summary, Howell's book is a splendid achievement - quite the most important piece of scholarship of modern philosophy ...'
Robert P. Wolff, University of Massachusetts
Buy options