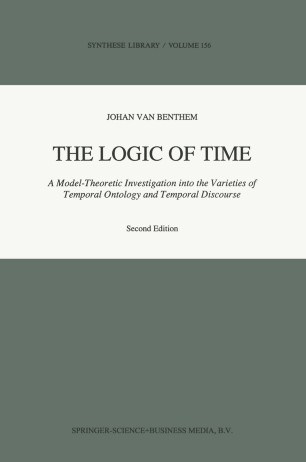 The subject of Time has a wide intellectual appeal across different dis­ ciplines. This has shown in the variety of reactions received from readers of the first edition of the present Book. Many have reacted to issues raised in its philosophical discussions, while some have even solved a number of the open technical questions raised in the logical elaboration of the latter. These results will be recorded below, at a more convenient place. In the seven years after the first publication, there have been some noticeable newer developments in the logical study of Time and temporal expressions. As far as Temporal Logic proper is concerned, it seems fair to say that these amount to an increase in coverage and sophistication, rather than further break-through innovation. In fact, perhaps the most significant sources of new activity have been the applied areas of Linguistics and Computer Science (including Artificial Intelligence), where many intriguing new ideas have appeared presenting further challenges to temporal logic. Now, since this Book has a rather tight composition, it would have been difficult to interpolate this new material without endangering intelligibility.

From reviews of the first edition:
`Overall this is an admirable work. I believe it will change and enrich the field.'
Steven Kuhn, Journal of Symbolic Logic, 52 (3) (1987)
`...the book...will be most useful to anyone, newcomer or expert, with an interest in the logic of time.'
John Burgess, Journal of Philosophical Logic, 13 (3) (1984)