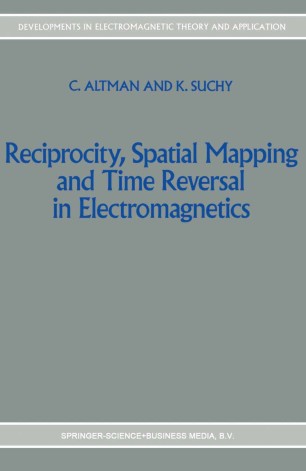 Part of the Developments in Electromagnetic Theory and Applications book series (DETA, volume 9)

The choice of topics in this book may seem somewhat arbitrary, even though we have attempted to organize them in a logical structure. The contents reflect the path of 'search and discovery' followed by us, on and off, for the in fact last twenty years. In the winter of 1970-71 one of the authors (C. A. ), on sah­ baticalleave with L. R. O. Storey's research team at the Groupe de Recherches Ionospheriques at Saint-Maur in France, had been finding almost exact symme­ tries in the computed reflection and transmission matrices for plane-stratified magnetoplasmas when symmetrically related directions of incidence were com­ pared. At the suggestion of the other author (K. S. , also on leave at the same institute), the complex conjugate wave fields, used to construct the eigenmode amplitudes via the mean Poynting flux densities, were replaced by the adjoint wave fields that would propagate in a medium with transposed constitutve tensors, et voila, a scattering theorem-'reciprocity in k-space'-was found in the computer output. To prove the result analytically one had to investigate the properties of the adjoint Maxwell system, and the two independent proofs that followed, in 1975 and 1979, proceeded respectively via the matrizant method and the thin-layer scattering-matrix method for solving the scattering problem, according to the personal preferences of each of the authors. The proof given in Chap. 2 of this book, based on the hindsight provided by our later results, is simpler and much more concise.