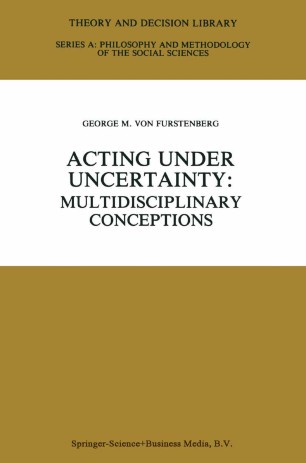 Uncertainty could be associated with wisdom, enterprise, and discovery. In ordinary speech, however, it has mostly negative connotations. There is "fear of the unknown" and "ignorance is bliss;" there are maxims to the effect that "what you don't know doesn't hurt you" (or: "bother you") in several languages. This volume suggests that we need be bothered by the excessive confidence with which scientists, particularly social scientists, present some of their conclusions and overstate their range of application. Otherwise many of the questions that should be raised about all the major uncertainties attending a particular issue routinely may continue to be thwarted or suppressed. Down playing uncertainty does not lead to more responsible or surer action, it sidetracks research agendas, and leaves the decision makers exposed to nasty surprise. This volume demonstrates that recognizing the many forms of uncertainty that enter into the development of any particular subject matter is a precondition for more responsible choice and deeper knowledge. Our purpose is to contribute to a broader appreciation of uncertainty than regularly accorded in any of the numerous disciplines represented here. The seventeenth-century French philosopher Descartes, quoted in this volume, wrote that "whoever is searching after truth must, once in his life, doubt all things; insofar as this is possible. " White areas left on maps of the world in past centuries were a much more productive challenge than marking the end of the known world with the pillars of Hercules.