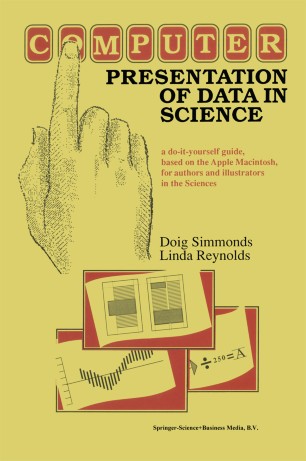 Computer Presentation of Data in Science

a do-it-yourself guide, based on the Apple Macintosh, for authors and illustrators in the Sciences

Books about printing written for printers or would-be printers go back over 300 years. The earliest of them were almost exclusively concerned with books; this century, however, there has been more emphasis on other kinds of documents, and particularly their design. But no shift in document production has been more sudden than the one that has happened most recently. ConSequently, the last five years have witnessed a substantial movement away from books written for professionals to ones whose aim is to help would-be authors produce their own documents. The opportunities for authors to do this have been opened up by the advent of desktop publishing (a term coined as recently as 1984). As most exponents of desktop publishing have come to realise, the term is something of a misnomer because the provision of facilities that allow authors to produce their own material for publishing is not quite the same thing as publish­ ing. Nevertheless, it has been useful in focussing attention on author-produced documents, and what might be described as the democratisation of document production. This book is different from others in the field. Its target audience is the busy scientist engaged in teaching or research who uses computers in the ordinary course of work. The world of scientific publishing is rapidly moving towards the day when journals will expect contributions from authors on disc, or even by direct transfer of data from the author's computer to the output device of an editor via telephone and satellite.