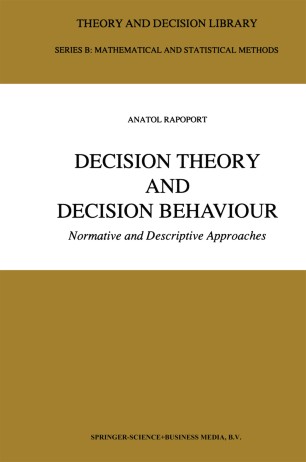 This book presents the content of a year's course in decision processes for third and fourth year students given at the University of Toronto. A principal theme of the book is the relationship between normative and descriptive decision theory. The distinction between the two approaches is not clear to everyone, yet it is of great importance. Normative decision theory addresses itself to the question of how people ought to make decisions in various types of situations, if they wish to be regarded (or to regard themselves) as 'rational'. Descriptive decision theory purports to describe how people actually make decisions in a variety of situations. Normative decision theory is much more formalized than descriptive theory. Especially in its advanced branches, normative theory makes use of mathematicallanguage, mode of discourse, and concepts. For this reason, the definitions of terms encountered in normative decision theory are precise, and its deductions are rigorous. Like the terms and assertions of other branches of mathematics, those of mathematically formalized decision theory need not refer to anything in the 'real', i. e. the observable, world. The terms and assertions can be interpreted in the context of models of real li fe situations, but the verisimilitude of the models is not important. They are meant to capture only the essentials of adecision situation, which in reallife may be obscured by complex details and ambiguities. It is these details and ambiguities, however, that may be crucial in determining the outcomes of the decisions.