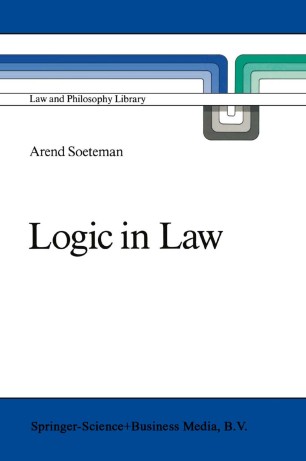 Remarks on Logic and Rationality in Normative Reasoning, Especially in Law

The study presented in this book was entered upon by me from a legal point of view. 'Legal logic' has been known for a long time, concerning itself with the methodology of legal and in particular judicial reasoning. In modern days, however, this 'legal logic' is sometimes also connected with modern formal logic, as it has been developed in the works of G. Boole, A. de Morgan, G. Frege, C.S. Peirce, E. Schroder, G. Peano, A.N. Whitehead, B. Russell and others. For me this gave rise to the as yet not very specific question about the meaning of modern symbolic logic for law. Already in an early stage it appeared that, although traditional legal logic and modern symbolic logic both concern logic, this may not create the misapprehension that a similar matter is at issue. Both concern themselves (among other things) with reasonings and reasoning. Traditional legal logic is, however, as it was said by the German legal theoretician K. Engisch: "a material logic that wants us to reflect on what we have to do if we -within the limits of actual possibility- wish to reach true, or at least correct judgements" (Engisch, 1964, p.5). Modern symbolic logic on the other hand is not concerned with the truth or correctness of the result of an argument, but with its validity, i.e. the question when or under which conditions the truth (correctness) of the conclusion is guaranteed by the truth (correctness) of the premisses.